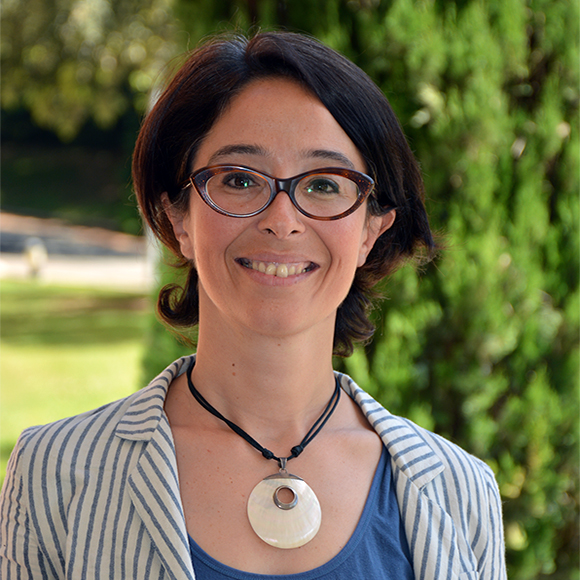 Graduated in Mathematics with honours (July 1995) at Università La Sapienza di Roma, she obtained her PhD in Mathematics at the Université de Franche Comté (France) in 1999.

After a series of scholarships at prestigious foreign universities in Germany, Belgium, France
and the United States, she taught at the Ecole Polytechnique Fédérale de Lausanne (Switzerland) for four years. She returned to Italy in 2004 with the Rientro dei Cervelli programme at Univerità di Tor Vergata and since 2009 she has held the position of Associate Professor (MAT02-Algebra) at Università Europea di Roma.

In recent years, she has been a tenured Professor of an advanced course in Game Theory as
well as of basic courses of general mathematics at the Degree in Economics. In addition, since 2016 she also teaches at the Degree in Science of Primary Education.

In 2015 she was among the three founding members of the Roman Number Theory
Association, an association that focuses on the dissemination of the Theory of numbers, with particular interest in developing countries. The association collaborates with UNESCO, ICTP, INDAM (national institute of high mathematics) and is recognised by the European Commission for Developing Countries.
She is a member of the GNSAGA research group of the non-profit research institution on
mathematics INDAM.

Her research mainly concerns Algebra and Algebra Geometry, considering Quadratic Forms,
Algebraic Groups and Involution Algebra, primarily studied with the help of coomological
invariants. In recent years, instead, she has focused on issues mainly related to the Theory of
Numbers (invariants of Numbers fields, Minimum Euclidean).

Due to didactic reasons and to scientific collaborations with colleagues of the Degree in Economics, her scientific interests have been extended to more applied branches of Mathematics, such as Game Theory or Graph Theory.